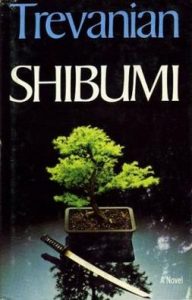 This one is admittedly an obscure one.  But not too obscure, allegedly the John Wick movies were based on this work.  (It even makes a brief appearance in the first John Wick movie, as well as in Atomic Blonde!)

One of these books is the masterpiece called ‘Shibumi’.

And a masterpiece it is.  Doctor Rodney William Whitaker wrote under a pseudonym, Trevanian.  In the late 70s and Early 80s, he was quite a prolific writer of Airport Paperbacks, and five of his books sold more than a million copies each.  However, he faded back into the relative obscurity he came from.

On the face of it, it is a classic cold-war era spy-vs-spy bad-ass assassin novel.  Nothin’ we’ve not seen before.  The chief protagonist is Nicolai Hel, a young boy/man of varied origin, who is the world’s most wanted man and most feared contract killer.  So far, so generic.  Nothing to see here.

But where this world of Nicolai Hel becomes magical is in the concept of its title:  Shibumi.

What is shibumi?  It is almost impossible to translate.  It is Grace, elegance, effortless perfection.  One of those uniquely eastern philosophy concepts us westerners battle to understand completely.  Nicolai Hel is a man of shibumi.  And to misquote the book:  one does not ‘achieve’ shibumi, one ‘discovers’ it.  And it is how Nicolai Hel discovers Shibumi which makes this book so much more than generic cold-war action thriller.

Because he discovers it through the game of go.

Trevanian weaves a masterful thriller in the milieu of the ancient Chinese board game of go, and teaches its principles and philosophies (if not its rules), and how these philosophies helps make life more liveable.

If I were to hazard a parable: it is the stoic principles of Marcus Aurelius wrapped up in ancient Sino-Japanese beauty, and some ass-kicking action thrown in for good measure.

This book is life-changing because it introduced me to the concept of shibumi, and the beauty it can bring even in the most dire of situations.  Long after the action scenes are forgotten, the concept – nay, the ideal – of shibumi remains.

I still seek shibumi.  And I have made my peace I shall never discover it.  But the search remains a noble pursuit.