My friend, the AI.

When I was in primary school — this was in the early 80s — we had a ‘library’ which had then just been renamed to ‘the media centre’.  Why?  Because over and above books, we now also had other forms of information-carrying devices.  Such as televisions weighing 70 kilos on squeaky-wheel trolleys, which, in turn, were connected to VHS players as large as microwave ovens.  No more books, we now have the collective noun of ‘media’.

And then, if memory serves it was 1986, the school got one of these new-fangled things called ‘a computer’.  It was a stock-standard 80s-era beige computer with two floppy drives and a green-screen terminal.  No hard drive, no mouse.  It intimidated the living shit out of us.   But one thing I will never forget was a xerox of a xerox of a photocopy of a xerox of a picture pasted up next to this dumb terminal which read ‘It’s just another tool – use it before it uses you.’ 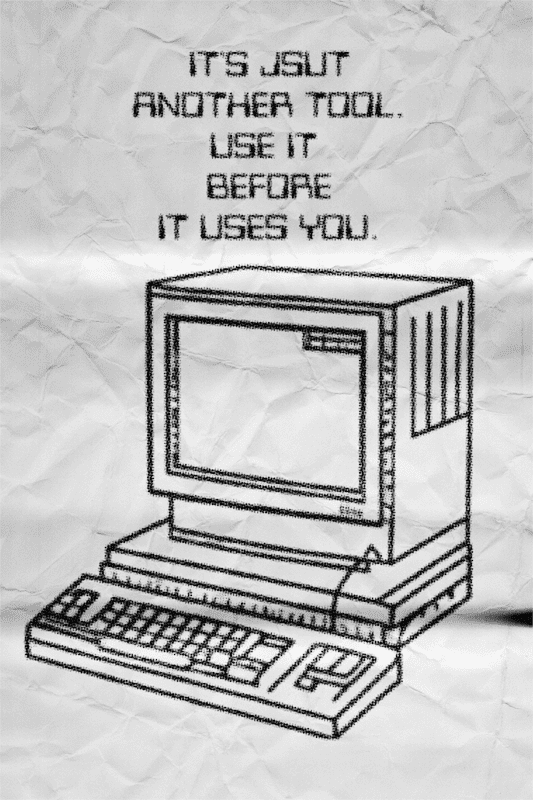 I was what, eleven, twelve years old at the time?  And not a very well developed eleven-year-old at that.  I had no idea what that little motto on the infinitely xeroxed picture meant.

Until the day I did.  My mom came home with a computer one day.  It had *gasp* a hard drive!  A 40-meg hard drive as big as a shoe box.  And not just two floppy drives, but a floppy and a stiffy.  (Stop giggling!).  And the screen?  Not even green, but what was called ‘page white’.  It weighed more than me.  (Now, after three decades of dedicating myself to beer and carbohydrates, I weigh 30 times more than my laptop).

But what does this thing do?  Twelve-year-old me got a lesson in ‘computers’ from my mother.  And then I promptly did a grade-eight (Standard six, for you old folks) history assignment for it, and got myself the one and only A I ever got for anything in school.  I got it: it was a tool!  It had a word processing program on it – WordStar, if memory serves.  And you don’t have to be Sherlock Holmes to deduce the buck-toothed and malnourished version of me wrote a story on that thing faster than you can search for the C-key when you’ve never used a computer before.  I could use this damn thing to my advantage!  When mom came home with a copy of Aldus PageMaker – the great granddaddy of what is today the Adobe suite of products – you better believe I drew pictures on that thing!  It was a tool.  I used it.

And while I was not alone — several other kids my age also got into the computer thing — most kids hid behind their mommy’s pettiskirts.  Irony: the clever kids.  I remember one kid who was a straight-A student who had a computer at home, but did not know how to fire it up, but worse, had no interest in firing it up.  While I was learning how to automate procrastination in GW-Basic, he copied his history long form questions longhand with a Bic pen.  While I did my maths homework on Lotus123 (Can you say ‘slash-range-erase’?), he did long division by hand.   When this rich kid grew up and started his own company, guess who he got to design his website?  And guess who did not know how to open his own email…  To me, the computer was a tool.  To many others, it was an intimidating thing challenging the natural order of the world and best be avoided.  But that was in the mid 80s, and this is 2023.

Which is why I am claiming ChatGPT and the like my new best friend.

And I hear the sound of the townsfolk coming at me with torches and pitchforks, for I had just uttered a blasphemy.

Back up here:  I am an artist.   (But I’m not.  I do not call myself an artist.  An artist is the greatest of all things, and you have no right to call yourself an artist unless many other people called you one first.  Just like you cannot call yourself a rock star.  You need to fill arenas across the world for several years before you can be a rock star.   So, for the sake of fairness, I will never refer to myself as an ‘artist’.   Likewise, I may be a writer and a novelist, but I am not a ‘New York Times Best Selling’ writer.  Not yet.  Heck, I’m not even the bestselling writer in my house, and I live alone.  But for the sake of convenience and that I work in a creative world, let’s go with that name.)  Art, and artists, is under enormous threat from AI.  I see it every day: the AI art, and the chorus of voices screaming against it.

Look, I get it.  I get the legal/ethical issues about using AI art.   I understand that machines are ‘ripping off’ existing artists because of machine learning.  I get it.

But here are the facts: AI will solve its legal and ethical issues sooner than you can beg for loose change, and creative jobs will be lost faster than a yellow lab loses hair.  Designers, photographers, content generators, creative writers, copywriters, musicians, heck, even novelists, are now, officially, a thing of the past.  Welcome to history, fellow creatives.  We are now obsolete.

You don’t like what I’m saying?  Tough – this is where I pull Darwin on your ass: adapt or die.

Because herewith another truth:  99.9% of the jobs eliminated by AI are lower-tier jobs, not the cream of the crop.  I will not repeat what Nick Cave said, but I’ll paraphrase: we can have artificial intelligence, but we will never have artificial creativity.  Paraphrasing St Nick again: no AI will ever be able to harness the levels of angst that led to Smells Like Teen Spirit.  AI may (and will, and that right soon) write, direct, create, and animate, the latest Marvel Universe blockbuster.  But it can never give you the sheer human drama and brilliance that was Green Mile, Atonement, or The Breakfast Club.  AI and emotion, by definition, cannot be in cahoots, and while AI may give a damn fine imitation of it, it can never deliver the real thing.  It can never compose like Jeff Beck.  It can never Stairway to Heaven itself into the collective subconscious.  Because it takes a human to think of the absurdities that make humanity just so damn human, when AI can only ever work in logic.  It is designed not to engage in beautiful absurdities.  No sex robot will ever be able to replace the genuine soul-to-soul connection of a human being, no matter how uncanny-valley-ish the silicone sleeve feels.  (Case in point: no AI will replicate my self-deprecating humour quite so absurdly as I do)

But this is a problem, ain’t it?  Because how many of us fall into that 0.5% who will not be replaced?  We can’t all be Nick Cave, Ian McEwan, and Jimmy Page, can we?  We’re not all Chip Kidd who gets paid absurd amounts of money to design book covers.  Nope, we’re just lower-middle-class creatives trying to make ends meet, and often not succeed.  We’re just trying to get by.  Our heads are on the AI chopping block, and we can’t even go work at McDonalds because even Do You Want Fries With That will be automated by Christmas.

Answer: embrace this new thing called AI.  Use it.  It is the most insane and important and invaluable tool ever created.  Ever.  AI will change the world more than the industrial revolution and the invention of the internet combined.  Life, as we know it, is over.

Example:  These images?  All scenes from my latest manuscript.  I generated all these images in less than ten minutes mucking about with Dall-E.  Is it perfect?  No!  It can even be argued as being ‘grotesque’.  But it can be.  Perfect, that is.  And soon, it will be.  And for me – when it comes to character bibles and storyboarding – things like this will shave countless hours from my workflow.  But I can put it to much better use generating advertising graphics.  Even if don’t use the AI image as supplied (which I won’t), I can use it for a springboard.  Suddenly, iterative design processes take minutes and not days.  Cover design concepts?  I can now mock-up A/B tests in less time it takes to make 2 minute noodles.  It literally took me longer to paste-up all the links in this blog post than it did to generate these images.   The “use it before it uses you” image?  Courtesy of Dall-E (Text added in Photoshop, AI seems to battle with text.  For now.).

Embrace the new AI overlords, my friends.  Use it.  Before it uses you.  Or even abuses you.  you will be out on your ass if you do not adapt.  Screaming against AI is like lamplighters screaming against electricity.

And how do us creatives do that?  By harnessing AI’s power to our benefit.  Right now, as I write this, I’m exploring AI’s capacity for marketing.  If you are reading this, there is a greater than 80% chance it’s because I’ve used AI to get you to.  I’m using AI to expand my audiences, to write my ad copy, to conceptualise visuals, to write my blogs.  (not this one, you’ll notice this is still me by the oodles of speller and gramming errors and my bull-headed insistence to use em-dahses incorrectly).  The tags and SEO for this post?  AI.  The links you found this on?  Thanks, AI.

I’m a writer.  I’m not going to get AI to write my books for me, because what would the fun in that be?  I like writing!  I’ll do it all day, every day.  The creative process is a lot of fun, and sitting behind a keyboard and finding out just what mischief my characters will get up to today is great fun!  I live for this shit.  But I know now that I can get AI to do all the dog work and slog work for me while I get down to business and write something.  And maybe, hopefully, someday write something that will put me in that 0.5% of people who cannot be replaced by AI.  But until then, I’m going to make The Machine my ally, and not my enemy.