It’s not every day I recommend a book.  Unless asked for.  “Hey, Gerry, do you know a book that will [x]?”.  if I do, I’d answer.  But unsolicited ‘recommendations’ is not generally something I do.  Today is the exception to “generally”.

Let’s talk about “hype”.  I don’t like hype.  Because nine times out of ten, all hype is, is a symptom of excellent marketing, propped up by the lowest common denominator.  I could name names, but I shall not.  Let’s just say I don’t think a book about a girl’s choice about bestiality and necrophilia was worth the madness which surrounded it.  Obviously, there are exceptions. 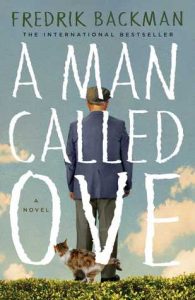 One such an exception was Harry Potter.  One could not have a conversation, anywhere, without the tidal wave of Harry Potter hitting you.  And, let’s be honest, it was warranted.  The Potterverse was worth its hype.

And now I’m back to my opening paragraph: a book which has some hype right now in certain circles.  By no means Twilight or 50 Shades or Harry potter levels of hype, but hype none the less.  And the cynical bastard who is me distrusted the hype.  But curiosity got the better of me, so I bought it.  And man, what an absolute pleasure.  One of the best books I’ve ever read.  Not because it is ‘important’ or anything, but simply because it is brilliant.  Funny, witty, tender, and oh, so, so real.  And I could relate to the main character so much that I want to sue the author for making a parody of me.

The book is question is the brilliant ‘A Man Called Ove’ by Fredrick Backman.  If I could give this book six stars, I would.  A tale about Ove (obviously) a cantankerous old man (sound familiar?) who lost his ill wife (sound familiar?) to cancer, (sound familiar?) and now cannot find a reason to carry on (sound familiar?).  And in his quest to not carry on, he finds several things that make him carry on.  But he doesn’t have to like it!  Ove will bitch and moan about it.  And in being his assholic self, Ove manages to creep into your heart and make you love him, root for him, cheer for him.

Are there better books?  Sure.  More important books?  Absolutely.  Funnier ones?  Duh.  But A Man Called Ove does something special, and that is what every lover of fiction desires: magic!

Why is it life changing?  Because makes one believe in your own capacity, love and ‘worthiness’ again, despite the ultimate loss.

And I needed that!